What’s the Oldest Piece of Tech You Use? 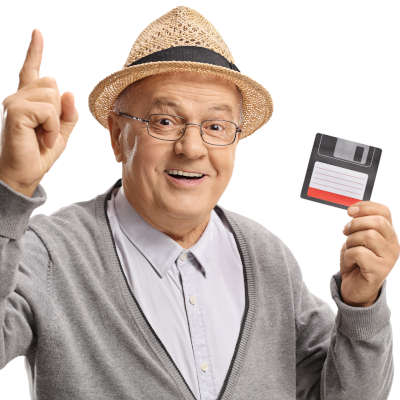 What’s the Oldest Piece of Tech You Use?

The good old days, the timeless oldies, there’s no school like the old school… A lot of us fondly look back on the simpler times, but technology typically pushes forward. In fact, if we look back at what we were collectively doing with computers back in the 80’s and 90’s, it’s practically embarrassing. Sure, the music and television shows of our formative years will never be topped, but less can be said for the technology. Unless you are a Boeing 747…

It was recently brought to the public attention when a retired Boeing 747 was featured at a virtual hacking conference. A cybersecurity firm noticed a 3.5-inch floppy disk drive in the cockpit. Yes, those 3.5-inch floppy disks, from 1995. The disk drive is used to load various navigation databases. It turns out that an update consists of a sequence of eight floppy disks installed one by one into the cockpit of the aircraft.

When was the last time you used (or even saw) a 3.5-inch floppy disk?

Honestly, we run across them pretty regularly here at Macatawa Technologies- they like to find their way into the bottoms of drawers and cabinets. If you don’t have a use for an old 3.5-inch floppy disk, we recommend using it as a makeshift drink coaster – especially those old America Online promo disks.

Let’s get back to the 747. Is it weird that an aircraft – something that needs to be 100 percent reliable – is using technology that most college students today have never used?

(Yikes, that last line made me feel all sorts of ways about my age…)

The answer is, actually, no. First of all, a lot of these planes were built in the 1990’s. They were designed with very specific, and very measured hardware. Large, long-range commercial aircraft aren’t manufactured haphazardly or in excess. According to Wikipedia, there were only 1,558 Boeing 747s ever built, and there are still around 419 being flown today. The onboard computers were designed with the technology of the day, and they were built very specifically for the aircraft.

This is even a case where the older technology isn’t putting the plane or the airline at risk. Floppy disks aren’t inherently more secure than other data storage and data sharing technologies, but in the case of a 747, someone would need to physically enter the cockpit with their own disks, with the right data on them in order to infiltrate the system. Whereas in 2019, a cybersecurity professor was able to crash the in-flight entertainment system using nothing but a normal USB mouse.

Please note, we aren’t trying to instill a fear of flying for anybody. As it turns out, the ethical hacker professor was only able to affect the entertainment system and not the more critical parts of the aircraft.

The lesson here is that older technology doesn’t necessarily mean it’s less secure, unless it’s actually connected to modern technology or modern networks. Your old cassette player will always play your cassettes, and never get an update that forces you to pay extra to listen to your old Prince tapes. That said, if your cassette player breaks, every all-Rush summer mixtape you ever made will have to collect dust until you find a second-hand replacement.

The same applies for business technology – that old printer that doesn’t connect to the network might not be able to serve as an entry-point to malware and cybercriminals, but it might also not be getting updates from the manufacturer to allow it to support Windows 10.

That’s where the danger of older technology also comes into play – if it’s connected to everything else, and not getting updated, then it could have vulnerabilities that make it an easy way in for hackers and other threats. If it’s connected to the Internet, it needs to be kept up-to-date.

There’s No Shame in Having Older Technology, as Long as It’s Secure

There is a fine line – running an older operating system on a business network, the same network as your company data, is risky. That said, having an older Windows 98 desktop just to run the game Warcraft II: Tides of Darkness on original hardware just to show your kids how flippin’ sweet the mid-90s were is admirable – just don’t connect that PC to the network.

What’s the oldest piece of technology that you use on a regular basis? Tell us your story in the comments!